Greek PM Kyriakos Mitsotakis is in Tinos attending the celebration of the Assumption of the Virgin Mary on August 15th.

The celebration coincides with the events for the anniversary of the torpedoing of the Greek warship “Elli” in WW2.

Kyriakos Mitsotakis is accompanied by the Minister of Defence Nikos Panagiotopoulos and the Chief of the Hellenic National Defence General Staff, Konstantinos Floros.

The prime minister inspected the torpedo boat Mykonos in the port, around 9:30, and threw a laurel wreath into the sea, a tribute to the torpedoing of the cruiser “Elli”. Shortly before 10, he arrived at the Holy Church of Evangelistria for the Doxology. 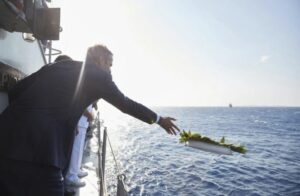 “We honour today in Tinos the Dormition of the Virgin Mary, the “Queen of all things, covered with the beauty of immortality, raised with glory, towards the heavens. Happy name-day to those who are celebrating”, wrote the Minister of National Defence Nikos Panagiotopoulos on his personal Facebook account on the occasion of the celebration of Christendom.

The celebrations in Tinos

On the day of the celebration, the Divine Liturgy is celebrated in I.N. of Evangelistria in Tinos and during it, as is customary, the head of the Navy and the representative of the governing board a torpedo boat and lay a wreath at the spot where the frigate “Elli” was sunk during the Divine Liturgy on August 15, 1940, by the Italians. The honourary cannon shots, which are heard at that time in the port, come from the “small canon of Elli” that was salvaged from the ship’s carcass and preserved.

The procession ends, on the marble platform, in Pantanassi Square, where a Deesis is held and Panegyrics are pronounced. After their end, the procession accompanies the holy icon on its return to the Holy Church of Evangelistria.